Eli Sheff is a leading expert on polyamory and has conducted groundbreaking research on polyamorous families with children. In the past, she has contributed her findings to the LifeWorks blog.

This summer, Eli is traveling the country for her Practical NonMonogamy workshop tour, which is bringing her here to Chicago. On Saturday July 7, 2018, LifeWorks is thrilled to host her for a community workshop on “Consent, Negotiation and Boundaries in Consensual Non-Monogamy (CNM) Relationships.”

To gear up for her visit, we spoke to Eli about her experience and research, as well as her aim to increase research-based understanding of alternative relationship structures and sexualities.

What first sparked your interest in the topic of polyamory?

I fell in love with someone who told me he never wanted to be monogamous or get married. This freaked me out—I understood this to mean that I wasn’t good enough to be with him forever. We were together for three/four years before I even heard the term “polyamory.” Then, I started to get to know and talk to people in the polyamorous community. I think about this as my “civilian time.”

Two years or so later, I was in graduate school, taking a course in ethnography. I had been hanging out with poly folks throughout those years, so when the instructor told the class it was time to choose our topic for a pilot study, I knew I wanted to collect data and conduct interviews with the poly folk I’d been getting to know. The initial study was so interesting that I realized I wanted to keep doing research on polyamory long-term. It became the topic of my dissertation, and then eventually became the longitudinal study on polyamorous families that has been at the center of most of my work. I published the findings from the first 15 years in my book, The Polyamorists Next Door: Inside Multiple-Partner Relationships and Families.

So, it’s been an organic process. In my personal life, I have been on the edge of polyamory multiple times, but I’m not actually polyamorous. My wife and I have a monogamous-polyamorous relationship, and I am the mono side. We’re super happy this way. I also consider myself polyaffective, which means that I have many relationships connected by emotional intimacy rather than sexuality. I am lucky in that I have many wonderful friendships and familial relationships that fulfill my needs.

Before we dive into your research, can you speak a little bit about the difference between polyamory and consensual non-monogamy (CNM)? How has language around alternative relationship structures evolved? Do you believe it will continue to evolve?

Language always has its limits, and terminology is one of those things that the community is struggling with.

Take the term “polyamory,” which literally means “many loves.” It refers to something very specifics—romantic relationships involving more than two people. That makes it an exclusive term that can’t accurately reflect every unique relationship structure.

Then, we have “consensual non-monogamy,” or “ethical non-monogamy,” both of which are much broader and do act as umbrellas over many relationships structures. However, using these terms means defining people by the negative—they are “not monogamous.” Using language this way reinforces the idea that monogamy is the standard or even the ideal.

Even using “consensual” or “ethical” has its drawbacks. While these words are useful in that they are specific, and in that they distinguish these relationships from infidelity, they also can seem almost defensive. Using the qualifier indicates an expectation of judgment. It can also mean that people are held to an extremely—or even impossibly—high ethical standard. Regardless of relationship structure, no partners are perfect, and neither are their relationships.

So, it’s a challenge. I personally often use “consensual non-monogamy” (also CNM) as an umbrella category. It’s not a perfect option, but it’s the best I have so far.

I do think language will continue to evolve as we grapple with these issues, and as our understanding of fluid sexuality and relationship possibilities continues to evolve.

Two things inspired my focus on polyamorous families—a pull and a push. I was pulled toward this topic when people kept asking me, “What does polyamory do to the children?” Notice the phrasing they use—not “how does it affect them,” but “what does it do to them.” It was clear to me that many people had already decided that my findings would be negative, and that being raised in polyamorous families must damage children. I wanted to find the truth.

I was also pushed toward this topic when the upper administration at my university—where I was an assistant professor—became unhappy with the sexuality research I’d been hired to do. And it wasn’t just the administration. American society at large was very suspicious of anything related to alternative sexual expression. In fact, two of my colleagues had been called before the state senate, and budget cuts seemed to target those professors studying topics such as references to cunnilingus in popular music and the cultural representation of women’s pleasure, or AIDS outbreaks among male escorts in Atlanta. The powers that be cast this research as illegitimate or even dangerous, as though we were pushing our students toward “deviance.”

I wanted to specifically look at what polyamorous families might be able to teach those parents navigating blended families after divorce and remarriage.

I still came up against administrative challenges. Unfortunately, when it came to research grants, there was money available for those who study alternative sexualities through the lens of pathology. If I had discovered drug use or abuse in poly families, there would have been more support for continued data collection. But I didn’t find drug use or abuse, and I wasn’t going to manufacture them to fit these sex-negative institutional biases.

And so, I didn’t receive tenure. Today, my old university has eliminated all study of human sexuality. Moves like this are really a drag, to put it lightly. And they’re not only negative for the scholars, but for the everyone’s shared knowledge and understanding of the diversity that exists in this world, whether institutions like that diversity or not. I am continuing my research and the Polyamorous Families Study independently, outside of academia.

In your years as a polyamory expert, what has been your most illuminating discovery?

It’s something the kids have taught me repeatedly. Over the years, along with some questions about the non-romantic relationships in their families, I’ve continued asking them questions about their mom’s other partner, or about how they felt when their dad’s boyfriend left. And, they continued asking my why I’m so focused on romantic relationships. They want to tell me about all of the wonderful familial care they receive. And, they tell me that yes, they miss their parents’ ex-partners, but they also miss their friends who have moved away.

They feel like the whole world is obsessed with the romantic and sexual aspect of polyamory, and that’s frustrating. That’s just not what they care about—they want focus on their interconnected network of supporting. They want researchers to focus on the ability to establish and sustain emotional intimacy, and their ability to communication. That’s what you really get from growing up in a polyamorous family.

I’ve also discovered new things from the adult family members, especially those confronting the realities of aging. They tell me that, when a partner dies, there’s comfort in the fact that you’re not necessarily alone. And it’s not just that you have other partners—you have partners and loved ones who understand that you’re going through a real loss, and that your grief is no less valid just because you have other loves.

And, I’ve seen how aging folks who are outwardly poly can struggle with housing discrimination. I’ve seen them begin to create their own retirement communities, where they can be safe to be who they are and love how they love.

Do you have a favorite CNM story that you’ve encountered through your research?

Here’s one that tickles me every time I think about it. One middle school kid told me about the time four of his adults went to a parent-teacher conference. He wasn’t aware that they had all gone together until the next day, when his teacher told him how lovely it was to see a divorced family getting along so well. 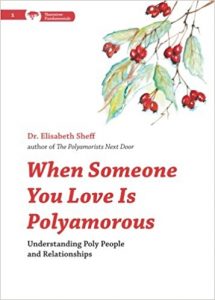 This kid thought this was funny and didn’t correct her. After all, she was partially right—these adults did all get along. She was just mistaken about the divorce part.

So, at school, this kid continued to “pass” as a child of divorce. To me, this says something amazing to me about changing attitudes toward relationship and family structures over time. 50 years ago, “divorce” was a word you whispered like “cancer.” Now, kids are totally fine with their teachers believing their parents are divorced. This signals some of the social change that has brought the increased popularity of polyamory about. It’s also promising for social change in the future. Someday, polyamory might not be something people feel they have to hide.

Is your research ongoing, and do you have plans to contact these families at other points in the future?

Yes. I’m in my fourth wave of data collecting now, interviewing those children who didn’t have much to say at three, but now have a lot to share at 18 or 23. As I mentioned, I’m also learning a lot more about aging in polyamorous relationships.

In fact, this ongoing research is one of the reasons I’m on my Practical NonMonogamy speaking tour. I want to spread the word about these new insights as they’re emerging.

Ideally, I will continue this data collection every five years or so—though sustaining independent research does have its challenges.

What is your ultimate goal with your research, work and Practical NonMonogamy tour?

I hope to make empirical facts and research-based information about sexuality more accessible to a wider range of people. Hearing moral panic about non-conventional sexual practices is easy. Hearing real information is, unfortunately, much harder.

For example, before I was in graduate school, it never occurred to me to read an academic journal. Most people would probably rather clean the bathroom! Now that I know how to read journals, I want to “translate” them so that other people can benefit from all the great research and information that’s out there. Empirical facts are the perfect antidote to moral panic.

A large goal of my study is to contribute more information about what polyamorous families are really like, warts and all. That’s how we can celebrate the positives and, maybe, find productive ways to address the negatives, without shame or blame.

To learn more about Eli Sheff’s upcoming community workshop, check out our events page and download this informational flyer. We look forward seeing you there!

Eli Sheff is the author of The Polyamorists Next Door: Inside Multiple-Partner Relationships and Families (2014 hardback and ebook, 2015 paperback and audiobook). The book details Sheff’s findings from the first 15 years of the Polyamorous Families Study.